Light Emitting Diodes (LEDs) are all around us. They are in our homes, our cars, even our phones. LEDs come in a variety of shapes and sizes, this gives designers the ability to tailor them to their product. Any time something electronic lights up, there’s a good chance that an LED is behind it. Their low power and small sizes make them a great choice for many different products as they can be worked into the design more seamlessly to make it an overall better device. 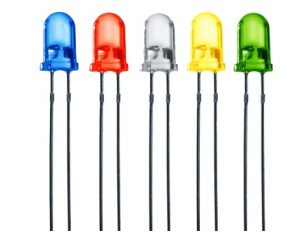 We have discussed high-brightness LEDs in the past, but throughout this post we will be focusing our attention on 5mm LEDs or through hole LEDs. These are the types of LEDs that are likely to be in your smaller electronics as an indicator light or something of that nature.  5mm LEDs take much less current to run than high brightness LEDs, 20mA compared to a minimum of 350mA for high-power LEDs. If you followed our original. you should know: more current = more light. So obviously these 5mm LEDs are going to be more of an accent light or light for very small spaces. This is exactly the purpose of 5mm LEDs, they can be used together in a large array to create a sign or some sort of matrix, or they can be used on their own to make a small indicator light or one of those tiny key chain flashlights.

5mm LEDs are super helpful as they can easily be powered from a small battery source and last a long time. This makes it simple to incorporate them in many electronics or put lights where they normally could not go. The name 5mm LED is dubbed from their dimensions: the epoxy case on top is about 5mm in diameter. These super small light sources are simple to use, but we can’t overlook certain steps in setting up our LED circuit.

An LED is a variant on the basic diode. A Diode is an electronic component that only conducts electricity in one direction. Diodes have what is called a forward voltage rating which determines the minimum voltage difference between the Anode (+) and Cathode (-) in order to allow electrons to flow (ahhh..sweet electricity). An LED is basically the same as a Diode, with the key difference being it generates light when the electricity flows.

5mm LEDs are a type of LED that hold the die on an anvil post that is encased in an epoxy dome for protection. Connections are then made via the two legs or prongs that come out of the bottom. As we mentioned, a diode only allows flow in one direction. This makes it crucial to differentiate between the positive side (the Anode) and the negative side (the Cathode). With 5mm LEDs it is easy, notice that the legs are different lengths? The longer leg is the Anode and the shorter of the two is the Cathode. If your legs are trimmed down or you have a manufacturer that makes them the same size, there is usually a flat spot around the rim of the 5mm case on the Cathode side (see below).

Make sure you always connect the positive of your battery/power source to the Anode and your negative or ground to the Cathode. This will make sure polarity matches up and electricity will flow given you have enough input voltage, lighting up your 5mm LED. If you wire it backwards nothing will happen and the circuit will remain closed. In making sure you have enough power for your light emitting diode, there are two key ratings you should pay attention to when looking at LEDs specifications: the forward voltage and the forward current.

Each LED should list a ‘Forward Voltage’ that defines the amount of voltage required in order to conduct electricity and produce light. If you try and supply anything less than this amount the LED will remain open and non-conductive. Once the voltage dropped across an LED reaches the forward voltage, your LED will light up. If you have multiple LEDs in series, you must account for the sum of their forward voltage ratings.

Let’s take a look at one of our standard Blue 5mm LEDs. Now we can easily see in the specifications on the product page that the LED has a forward voltage of about 3.4V. So we take this LED and try to hook it up to an AA battery, will the LED do anything? AA batteries only have a nominal voltage of 1.5V so no, we do not have enough voltage to conduct electricity. However, if we add another AA battery in series our voltage will be at 3V and we will be able to run the 5mm LED. ‘But you said that LED needed 3.4V!’ Yea I know, but when talking within a few decimal places like that you will be fine.

Now some people think they only need to take care of the LED voltage and they will be fine. This overlooks a very important part of LEDs, the current. LEDs will draw as much current as they can in a circuit, in turn causing the LED’s temperature to increase until it burns out. So in an effort to deal with less failed LEDs, let us please pay attention to LED current ratings.

The example above, when your input voltage and forward voltage are so close, is the one example where you will not need to worry about current much. As a rule of thumb on our site, when your input voltage is 3V, you can power any of the 5mm LEDs other than the reds and yellows without worrying about keeping track of the current. This is because there is not enough current available in the source power for the 5mm to draw and burn itself out.

In every other instance you need to limit the amount of current flowing through the LED. With
high-power LEDs this is done with a constant current driver. 5mm LEDs current ratings are much lower, usually around 15-30mA, and we can control the current by placing a resistor in series with the LED. This is where you will hear the term current limiting resistor a lot as the resistor makes sure the current that flows through the circuit is significantly limited.

5mm LEDs are usually tested at 20mA, they can take up to 30mA of current but in my opinion I would usually try to keep 5mm LEDs at the 20mA that is recommended on all their specifications. Now we have to figure out how to find the right resistor size for your circuit in order to keep your LED(s) safe!